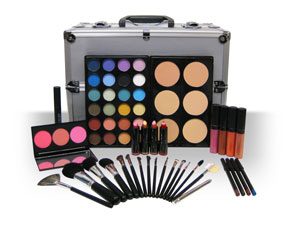 Sephora MAKES ME CRAZY. When I go into one I’m overwhelmed by the glare and the noise and the perfumey smell and need to go somewhere dark and quiet to recover. And I’m no anti-consumerist mall hater; I can shop for clothes with the best of ’em. There’s just something about Sephora in particular that gets to me.

WHY do I have such a problem with Sephora? I think it’s two things. First, it’s the sales people. Why would I buy the eyeshadow recommended by someone wearing eyeliner that looks like it was drawn on by a toddler? I wouldn’t, of course. I don’t understand why the company hires people to sell makeup who don’t know how to choose the correct shade for themselves or apply it correctly. Well, I do understand—they hire them because they’re cheap and the customers don’t complain about it and buy the makeup anyway, which is a depressing thought. Stand up for quality, people! Valeria apparently has her own qualms about the sales people there as well, since they inspired this post.

The second reason I have such a problem with Sephora is my own internal debate  about the idea of wearing makeup, and I admit this is really not Sephora’s fault.

What is my issue with makeup exactly? Really I’m of two minds about the whole topic. Why do we wear makeup? Because it makes us look better, but is it because we feel like we have to? Who’s making us feel that way, ourselves? Why shouldn’t we just be able to do what we want and look the way that we want? I don’t want to do something just because society is telling me I have to. On the other hand, it does make me look better…

It’s interesting that I have such an issue with makeup because I don’t have the same problem with buying clothes. I’ve always been into fashion, but have only belatedly gotten on the makeup wagon. Which is not to say that I’ve never worn makeup. I’ve always worn some, but in a rather minimalist way. And apparently I’ve never learned how to apply my mascara properly!

3 responses to “Why Do Women Wear Makeup? A Makeup-Related Existential Crisis”