My post about dressing up in costumes reminded me of my childhood wizard obsession.

Clearly I’m not the only one obsessed by wizards, as this article Nine Noble Virtues of a Wizard on the site How To Become a Wizard proves. But who are we all, the wizard obsessed, and what makes wizards so appealing?

I was a shy little kid, the typical only child. I was very imaginative, and when I wasn’t outside in the yard making a fire and “potions” I spent all my time reading. I read Lord of the Rings so many times starting when I was about eight that I’m sure at the time I was the world expert on it. Of course, that was in the 70s, before the movies came out and everyone and their mother thought they were an expert, so I don’t think I had anyone to talk to about my obsession. If I’d been born 20 years later I’m sure I would have had a LOTR blog and written Gandalf fan fic.

“Oh Gil-Galad was an Elven King,

of him the harpers sadly sing,

The last whose realm was fair and free

Between the mountains and the sea…”

Seriously, how many eight-year-olds know the Poem of Gil-Galad? Only pretty geeky ones, I’m guessing. I can also recite from memory the song you sing to call Tom Bombadil, which will come in handy the next time I get attacked by barrow-wights. I wish I could remember some of the things I learned in school half as well….But I think I’m pretty typical of the wizard obsessed. 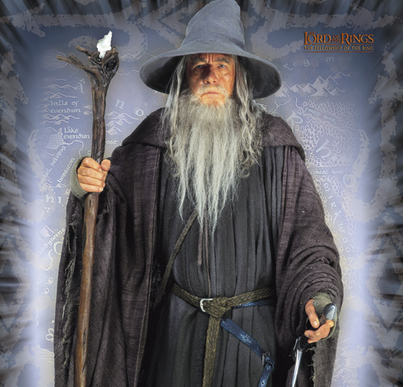 Gandalf in his cloak

Have you noticed how the clothes in fantasy and paranormal books are so much more interesting than the ones in real life? The characters actually wear things like cloaks, which I don’t see a lot of on the streets of Boston.

Yes, I know that’s because they’re books, and therefore NOT REAL, but still. You have to admit clothes in real life can seem so modern and dull by comparison. How come there are no capes at Macy’s? I mean real honest-to-goodness capes, not those little girly capelet things.

Ok, so current societal norms do not really allow cloaks and capes as a general rule, which is why we have our Halloween and our masquerade balls and our Mardi Gras. I know Halloween is almost here and I don’t usually dress up, but this year I want to. I want to dress up like a wizard to honor that little girl who thought she was going to grow up to be a wizard. She was so imaginative, back in the days before she started trying to become someone who would “be successful.”

And let’s face it, wizards are cool.

6 responses to “Cloaks and Capes: Yes In Fiction, No In Real Life”