I used to avoid bling like the plague, because I thought it was too flashy, and I definitely wasn’t flashy. I thought my style was “elegant” or “understated,” or something else way more under-the-radar than bling. Because by it’s very nature, bling is not subtle. Bling is shiny and in-your-face. Like these nails from blingup.com.

Lately though I’ve come to embrace the bling. The key is to use it in moderation. Hey, if it’s your style to wear lots and lots of jewels and other shiny stuff then more power to you. I’ve just always instinctively gone the other way sartorially, so this advice is more for people who tend to underdo it rather than than the ones who overdo it and have to worry about how much is too much.

Take these shoes. A beautiful color, and covered with silver studs. I’d say that’s pretty blingish, right? But these shoes do blingy with class. Yes, if I wore clothes that were also covered with silver studs or sparkles it would probably be overkill paired with the shoes, but with simple solid colored pants/shirt and some moderately noticeable jewelry, I would still be tasteful. I’d make a good kind of statement instead of the “oh look at all that bling” statement. 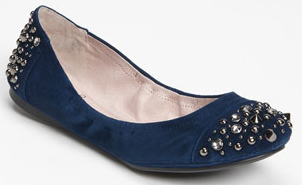 Now these shoes have bling

And by the way, I think a lot of bling can look good on some people. Valeria dresses much more blingishly than I do and it looks right on her, but it just isn’t me. It’s hard for me to walk the line between boring and statement making, which is why I’m so preoccupied with this topic.

Now check out this shirt. Originally I was going to use this as an image of the bad kind of bling, but then I decided I wanted it! Would I wear it to work? Not exactly. I would probably wear it with jeans and simple silver jewelry, and that would be enough bling. But I like it.

The rhinestone-studded “Princess” t-shirt from Customizedgirl.com:

A shirt with bling

I think the moral of my story is that those of us who are trying to be tasteful and classy should push their boundaries a bit more. As I get older I feel like I get bolder with my clothing choices and that is a good thing. After all, the definitions of “tasteful” and “classy” in my head are definitely from my mom’s ideas, and style changes. I think those terms deserve some revisiting from time to time.

2 responses to “A Judicious Use of Bling”